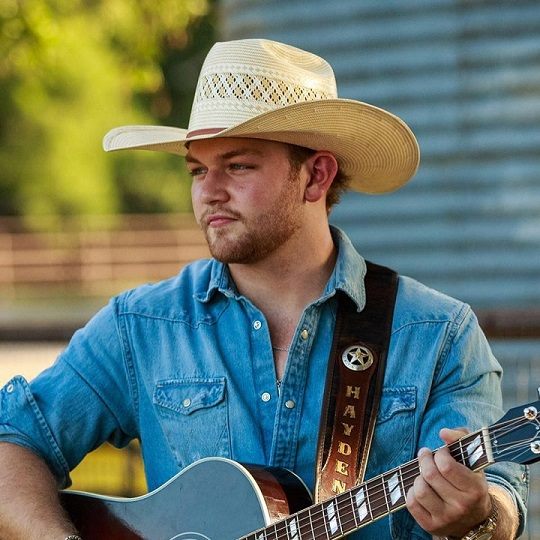 Hayden’s road to music was not the traditional one. In fact, he met it with reluctance. As a young kid Hayden would watch the CMA Awards with his family and, mesmerized by the music, he would sit as close as he could to the tv and try and sing along. At 14, he attended his first concert, Eric Church. It was then and there that he decided to take his first guitar lesson, yet this was just a hobby at the time. The thought of creating music for a living seemed unreachable. He was happy to just play and sing in the comforts of his bedroom.

Then last year, it all changed. He was starting his first year at Texas A&M University studying Construction Science and he heard a knock on the door. A young lady had heard him practicing his guitar and asked if he would sing her a song. Hayden tried everything he could to talk her out of it, but then his roommate came out from his room and they both convinced him that he had no choice but to oblige. Succumbed to the pressure, he sang a Luke Comb’s song and without him knowing, his roommate filmed, uploaded it onto YouTube, and sent it out to their peers. And that is how it all started.

The response was overwhelming and Hayden decided that it was time to take this seriously. All of his spare time was spent practicing and writing, which then lead to a few local acoustic shows. And while it all took a little nudge, things have taken off in a big way the last 9 months. Hayden now performs every weekend around Texas with multiple TV appearances including appearances on Dallas’ ABC TV “Good Morning Texas,” CBS TV in Austin’s “We Are Austin,” and on CBS TV in Bryan/College Station’s “Free Music Friday.” He has had the opportunity to open up for Ray Benson of Asleep at The Wheel and Casey Donahew and has performed at the same events with Whiskey Myers, Cory Morrow and the Eli Young Band.

Hayden’s musical influences are deeply rooted in his home state of Texas with legends such as George Strait and Cody Johnson as well as stars such as Luke Combs, Jon Pardi, and Eric Church. Some may be surprised to find out that Hayden is only 19 years old as he has a country soulfulness well beyond his years. This can be heard on his first album set for release in December 2018 titled “First Rodeo.” This album should be a great one as Hayden has joined with some very well-known names in the music industry including 3-time Grammy award winning Tre Nagella at Luminous Sound in Dallas. Tre has worked with artists such as Blake Shelton, Lady Gaga and Kirk Franklin to name a few.

As Hayden’s popularity continues to grow, he will be playing to more and more packed houses across the state and beyond including an event for The National Finals Rodeo in Las Vegas to headlining shows in Clovis, New Mexico this coming March. This might be the “First Rodeo” for Hayden Haddock, but it is sure not to be his last.