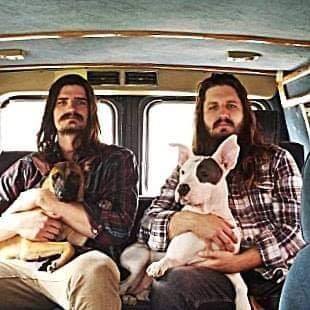 Desdimona was born of whisky and smoke on a rotting back porch in Grimes County, Texas. Through the oaks and pines, the sounds of banjo and guitar were heard laboring under the weight of the words they carried. They were the voices of Torin Sloan Franklin and Robert Chance Herrera whose dark harmonies told of great pain and booze-fueled jealousy, longing for redemption and the one who got away. Completely disinterested in the society they saw around them, they decided to take out and live their lives telling stories and singing songs under neon signs and open skies. But not without some thunder. Enter James Daniel Brunson: 6’7” of pure upright bass destruction. An innovator of his instrument and the crucial third and final nail in this insidious coffin, he is the exclamation point at the end of our mission statement. The three spent the next two years crooning and pickin’ across Texas building a cult following and cutting teeth sharper than your grandaddy’s blade.

In early 2015, it was revealed to Torin that he would soon be a father and the band took a brief hiatus to work on other projects and do a little schoolin. In order to focus on his career as the world’s gnarliest lead guitarist for a range of projects, Robert amicably parted ways with the band, (and you may just spot him rippin up a mando on stage with the boys from time to time). Enter serendipitously: David Webster, saltiest of dogs and Plantersville original, this banjo pickin whisky sippin gentleman stepped in to fill the boots, and in 2016 the boys set off on a string of tours covering 22 states and released a murderously rough EP, Down Like Charlie Brown, before finally landing back in Grimes County on that very same porch to record their first full length album “Songs of Sad Revenge” and preparing for another national tour. 2018 sees the Desdimona crew releasing their first official full length album and returning to the American highways they have come to know and cherish. They also skateboard and practice yoga.